It all started as a joke...

In 1978, a baby squirrel was rescued after being blown from her nest during a hurricane. Chuck and Lou Ann Best chose to take her in and make her a part of their family. The little squirrel adapted very well to her new home in Sanford, Fl.

Some of her favorite things to do were to nestle in Lou Ann's shirt for warmth and travel everywhere with her new family. She greeted the kids at their local roller skating rink and went on their camping and water-skiing excursions. She loved to sit on Chuck and Lou Ann's shoulders while they sat in the water. Sometimes, she would even take a dip into the river to get cooled off on a hot day.

Shortly there after, Chuck bought his daughter a remote controlled boat for her birthday. Their friends started teasing him saying that he bought it for himself, since he played with it all the time. Defending himself, he quipped, “I have to learn to drive the boat so I can teach my squirrel to water-ski!" In that moment, Chuck and Lou Ann decided they were going to teach their squirrel to ski while on their river outings. 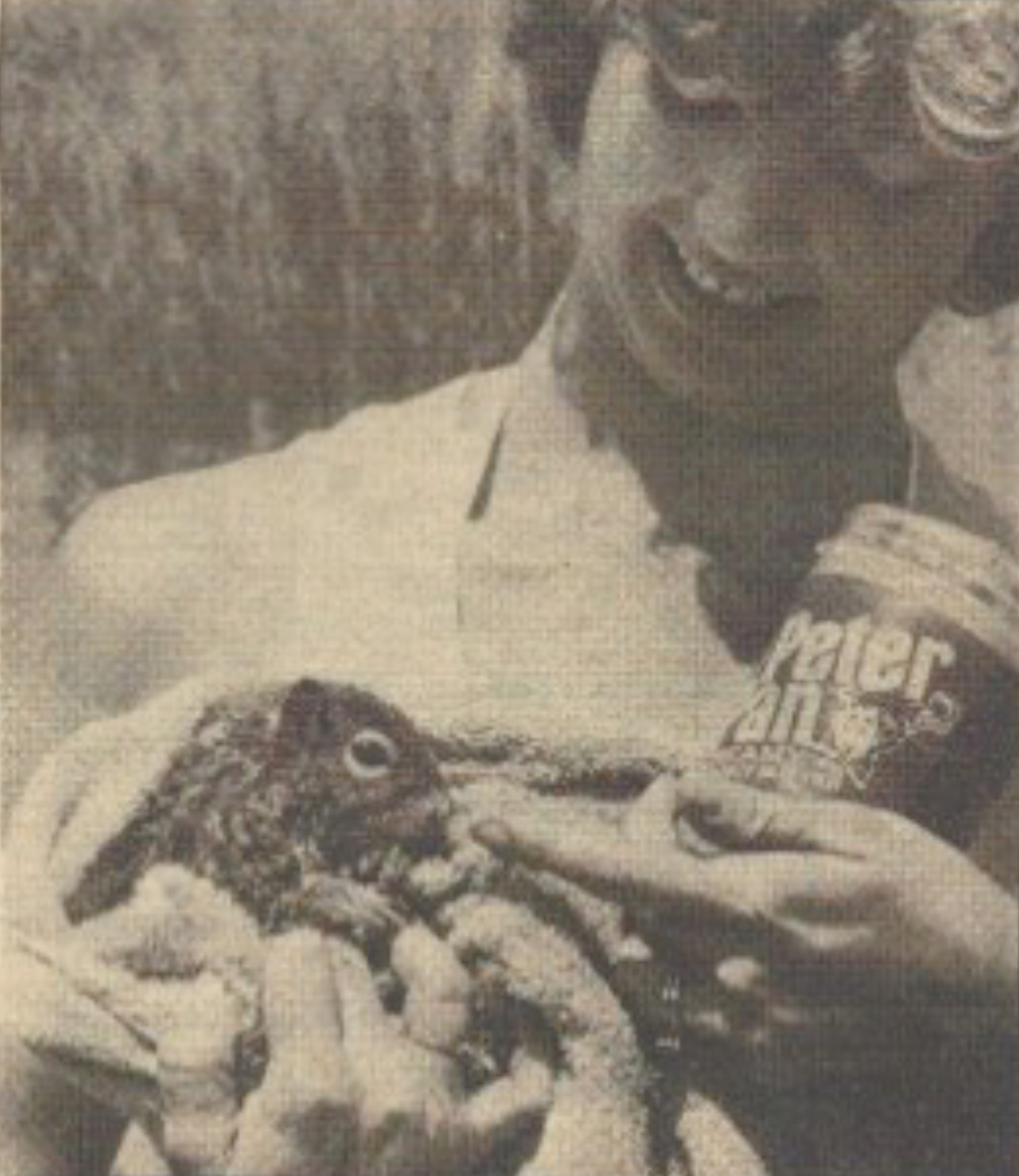 It wasn't long before the local newspaper, The Sanford Herald, heard about the little aquatic squirrel. They published the first newspaper story about her in May of 1979. The Orlando Sentinel followed, and then Twiggy's story hit the media circuit. Many fans sent clippings to the Best's from all over the world.

ABC News out of Orlando, FL filmed the first news story, which ran on Good Morning America. They went on to win an Emmy award for the story. Before long, the Best's were contacted by "Real People" where they appeared on their first national television show. Telephone calls flooded in from people wanting to book Twiggy for shows. The little squirrel was on her way to stardom.

Chuck and Lou Ann felt that their squirrel needed a stage name. They decided to name her "Twiggy" since she chewed the leaves off of all of Lou Ann's house plants leaving nothing but twigs.

The rest is history...

Twiggy has been performing since September of 1979, traveling all across the US, Canada, Bermuda, Europe and Germany. She has appeared in numerous books, magazines, newspapers, and television shows all over the world.

Chuck and Lou Ann also trained other animals to water-ski, two miniature horses, two French poodles, a black cat, an armadillo and a toad. They taught one of their squirrels named Ollie to jet-ski. Chuck and Lou Ann also taught 3 squirrels to ski in a pyramid and named the act "Lights, Camera, Action." Other than water skiing, Twiggy also learned to hang glide and ride in a helicopter!

In November of 1997, Chuck Best had a heart attack and drowned while saving the life of his step father. Lou Ann canceled all shows currently booked for the winter 1998. Lou Ann asked for a sign and that is just what she got. One afternoon, while sitting in her dining room, a squirrel showed up at her sliding glass door. Lou Ann let the squirrel into the house and immediately started working on water ski training in order to continue on the business. Just like in the beginning when all this craziness began, she was flooded with phone calls. Everyone wanted Twiggy. 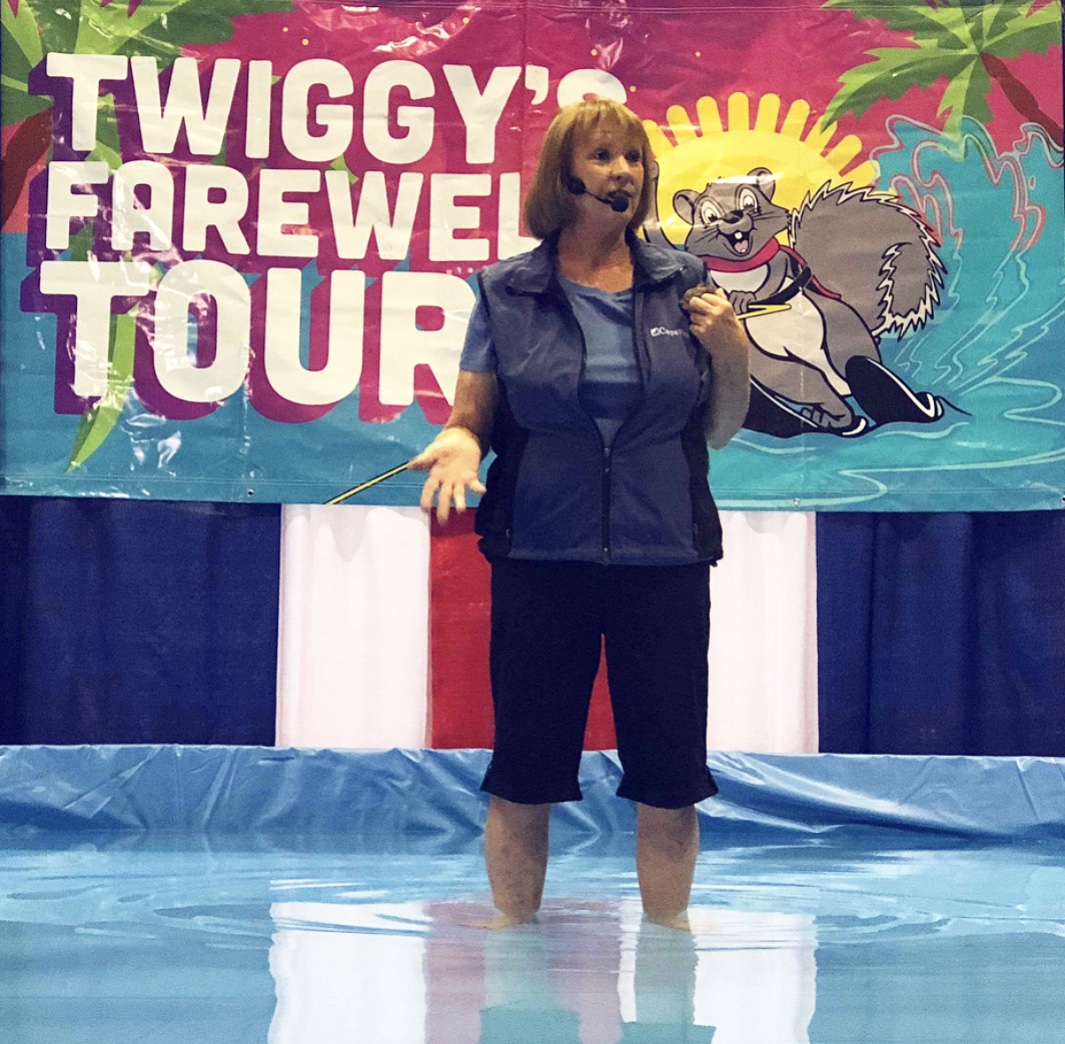 Lou Ann trained Twiggy IV and started touring again with this amazing water-ski act. Due to her husband's passing, Lou Ann decided to make water safety an important part of Twiggy's act. She created a squirrel-sized life jacket for Twiggy to wear in her performances. There after, all of Twiggy's shows were focused on teaching her fans about water safety.

Lou Ann and Twiggy's Water Safety Tour went on to appear in several movies and made appearances on "Good Morning America", "The Rosie O'Donnell Show", "The Wayne Brady Show" and "Late Night with David Letterman."

After 39 years, Lou Ann decided it was time for her to retire her tour. Throughout her career, she was able to travel the world fufilling her dream of promoting water safety. She trained 8 water skiing squirrels and spoke to millions of people about the importance of water safety. Lou Ann and Twiggy VIII are retiring in Osteen, FL with plans of writing a memoir and bringing Twiggy to the big screen.

With the new year, Twiggy starts a new chapter in her legacy. Lou Ann’s son, Chuck Best Jr. has decided to take on the family business and continue Twiggy’s story! Chuck has reimagined his parents’ show & is ready to embark on a new tour for Twiggy’s 40th Anniversary! He’s excited to travel the United States & Canada with two new squirrels, two friends & his dog, Roxie!