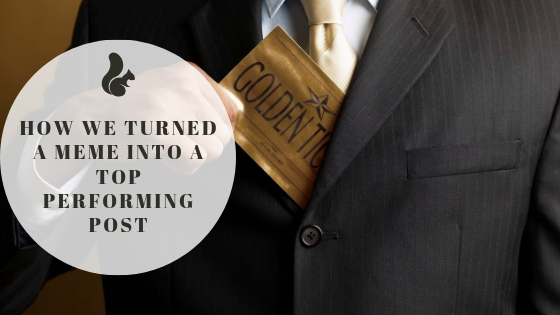 You may think a water skiing squirrel sells itself…for the most part, you’d be wrong. She has the raw talent, but we have to not only market her, but market her WELL. Keeping up with the times is essential to any business’ success and doing it better than everybody else is even more important. I’m about to tell you how a meme helped Twiggy gain followers, encouraged her followers to engage and was one of her top performing posts!

Now, this is a story all about how Twiggy’s insta got flipped-turned upside down

(I know you sang that  to the tune of The Fresh Prince of Bel-Air ;))

Okay all jokes aside, here we go. You may have heard the phrase “Feeling cute, might delete later…idk,” made famous by teenage girls on Instagram. (KNOW YOUR MEME) The “Feeling Cute Challenge” originated in 2017 from a meme posted on Twitter. Thus a trend was born, one that we very happily jumped on. Below, we have decided to bestow upon you some examples of our favorite versions.

The hardest part is coming up with something clever to “feel cute” about. Well, under some VERY unfortunate circumstances, Twiggy IX decided she was going to have a little snack and chew through Sydney’s BRAND NEW $80 MacBook Air charger (I’m not bitter I promise.) Thankfully she wasn’t hurt, but Sydney’s heart and wallet sure were. As you can imagine, we follow quite a few squirrel Instagram accounts (40, to be exact.) The fallen charger was not the only choice.

We had actually thought about saying “Feeling cute, might water ski later…idk,” but it didn’t seem to have the right ring to it. After some research, we noticed the trend of squirrels chewing things they weren’t supposed to, especially electrical cords. We knew that many accounts directly or indirectly involved with the squirrel community would understand Sydney’s pain, as well as, any animal lover with a rambunctious pet.

The second and arguably, the most IMPORTANT step, is the picture. A meme is nothing without the picture that follows it. We scoured through our thousands (hundreds) of Twiggy photos until we stumbled upon the perfect one. Sydney had captured a picture of Twiggy IX water skiing with her mouth open. Realistically, she was probably mid-sneeze, but her face was priceless. Now throw together some fancy text and your picture and you’ve got the golden ticket.

Now we’re not saying that it’s a guaranteed hit, but if you couple it with hashtags within your strategic range, a few strategic shares and a whole lot of understanding, then you’ve just entered The Chocolate Factory. Our engagement sky-rocketed with fellow squirrel parents reminiscing on the times their squirrels ate their cords and some helpful tips to keep it from happening again. Twiggy’s “Feeling Cute Challenge” garnered 250 likes, her profile gained 20 new Instagram followers and the meme is now ranked as our second most engaged with post this month! On Facebook, her meme reached 825 people, had 6 shares and a total of 96 engagements! Who said you have to be serious when it comes to business?