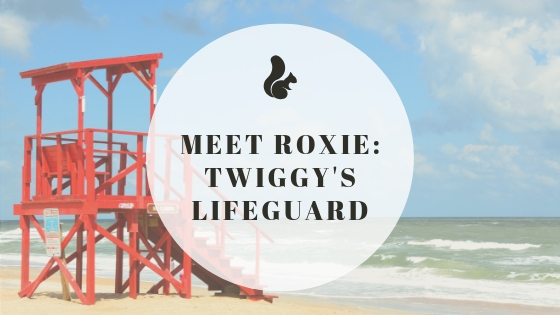 Our newest member and arguably the safest member of our team is Chuck’s 3-year-old, chihuahua-dachshund mix. Her full name is Roxanne Rae Best (Yes, she has a middle name.) She was named after the song Roxanne by The Police, but she doesn’t have to turn on the red light. For the most part, she goes by Roxie (unless she is in trouble, then she gets the full name.) She was given to Chuck by his sister and he instantly became wrapped around her tiny paws. She is only 6 pounds and the biggest snuggle bug any of us have ever met. Roxie is sweet as can be and the perfect fit to be Twiggy’s lifeguard.

Roxie earned this prestigious position because Chuck didn’t want to leave her behind while we travelled for our Twiggy Tour. How could he leave behind his best friend, snuggle buddy and personal vacuum cleaner? Also, look at that face, who could say goodbye to her?! After only 2 days of training, Roxie learned to climb up a set of stairs and sit in a small chair. She eventually got her own personalized lifeguard chair adorned with her title. Of course, that meant she had to also dress the part. Thanks to our friends at Safari Sun, she also rocks a personalized red lifeguard shirt (in XXS.) Now, she sits in her chair and watches Twiggy during the swimming portion of the show.

Most of the time, she takes her job very seriously. She is the epitome of a hardworking pup-fessional. Other times, she can be found running through the crowd looking for popcorn, rolling onto her back for belly rubs or laying on her heating pad when it’s too cold. But in all seriousness, we highly recommend that everyone swims within eyesight of a lifeguard. And to answer everybody’s question, no Roxie is not for hire! Twiggy doesn’t go anywhere without Roxie!